The Zeenat Haroon Rashid Writing Prize for Women has achieved tremendous literary credibility in the three short years since its inception. It has discovered talented new women authors and promoted their writing across both print and digital platforms. The 2020 winner, Raniya Hussain, was published in a national newspaper and widely interviewed in the press, radio and social media. All shortlisted and longlisted writing is available to read on the prize website www.zhrwritingprize.com

The prize carries a cash award of Rs.100,000 (one lakh) and in 2021 the call for submissions is for SHORT STORIES (fiction) on any subject or theme which uses Pakistan as a canvas or location. Entries open on April 1st and close on June 30th. The competition is open to all women of Pakistani nationality or Pakistani heritage over the age of 18 and, as always, the judges look for writing with a strong personal voice. 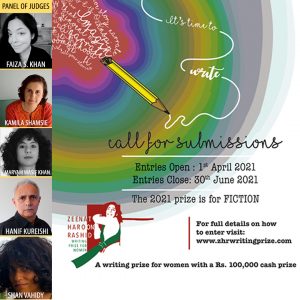 This year the judging panel features some of the best-known literary figures in the Pakistani landscape, including novelists Kamila Shamsie and Hanif Kureishi:

Full details on how to enter and comprehensive competition rules can be found on the website www.zhrwritingprize.com

Reckitt Benckiser meets the President of Pakistan; reiterates commitment to a healthier and cleaner Pakistan